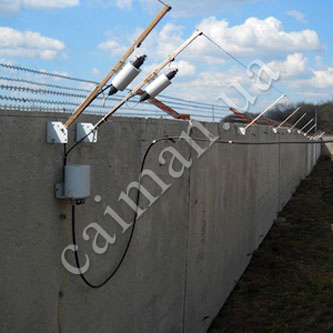 In terms of construction a capacitive security system of an object is an electric circuit connected to the device which is measuring the electric capacity between a circuit and ground. When any objects get into the system’s surveillance area, capacity between circuit and ground variates and a monitoring device is actuated and will transmit an alarm signal to the watchpost. Configuration of a capacitive system allows of eliminating any false alarms caused by weather effects on sensor capacity – for example, rain, snow, and others. One more positive aspect of using a capacitive security system is that flat or concertina barbed tape barriers Egoza erected on insulators or glass-reinforce plastic consoles can be used as an electric circuit.

Production Group Caiman supplies capacitive systems of objects’ perimeter protection at affordable prices, performs installation and adjustment of them. Caiman Company recommends using capacitive security systems in combination with our high-quality razor wire Egoza barriers applying the barrier itself or single-strand Egoza barbed wire installed on insulating elements along the perimeter of the protected object as an electric circuit. Warranty is provided for capacitive security systems supplied by Caiman Group as well as for works on their installation. Caiman specialists also perform warranty and after-warranty service maintenance of sold security equipment.