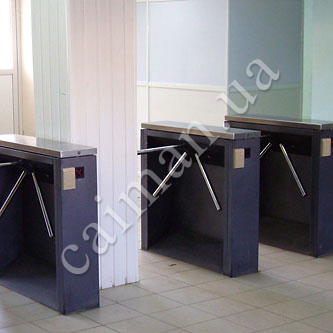 Turnstile is a revolute system for access control to the secured territory. Turnstiles thanks to their construction have high throughput efficiency; that is why they are installed in places of mass pass onto enclosed territory – checkpoints, railway/metro line stations and i.e. In ordinary state the turnstile blocks the passage, while open-passage signal injection the turnstile can freely rotate about its axis enabling the pass onto the territory of the object. There are half- and full-length turnstiles. Half-length turnstiles can be got over, that is why they are used on the objects with low and moderate security requirements and are installed in direct closeness to the watchpost. For important objects full-length turnstiles should be better used, they thoroughly block the passage ability to the territory.

Elevators are also used as one of the variants of actuating devices in access control systems. Elevator is an entrance security cabin by its essence from which a person can get only to those floors where he has access authorization. Elevator’s stop on another floors and door opening is forbidden by access control system.

Automatic gates and turnstiles are used for limitation of free automobile transport movement. Automatic turnstiles of different constructions as well as automatic gates of various versions – swinging, sliding, upward acting gates and roller shutters are used for this purpose. On the ordinary objects gates or turnstiles are enough means for transport’s encroachment restriction to the enclosed territory. On the objects with high security level anti-ram barriers for emergency automobile braking are used further to the gates and turnstiles.