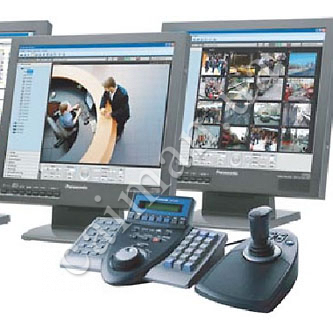 Hardware video recorders in terms of construction are made in form of a loose module, hardware components of which are placed on a single board. Hardware video recorder properly performs its functions, is of intuitive control and resistant to operation interventions by users and also it cannot be knocked out of service by malfunction. At the same time modification of functional set of a hardware video recorder is often impossible, replacement of this equipment is required. Moreover, the capacity of a single board hardware recorder is often insufficient for performing several functions at a time and for processing large-volume dataflow what narrows their application field in security systems.

Video recording systems based on personal computer are far more flexible than completely hardware solutions. Using of a personal computer as a system for data receiving, analysis and storage, transmitted from video surveillance cameras allows of exploiting a wide range of solutions which can constantly be expanded by means of upgrading and completing software. Video recording systems bases on PC can be operating as a constituent part of comprehensive security systems, easily communicating with other security systems what is barely possible when using a hardware video recorder. Albeit PC-based systems have some significant disadvantages and major of them is instability of PC’s operating system and trivial human element. Virus activity, failures of operating systems and destructive activity of a PC operator can result in instability of system operation or its full breakdown.

One more solution is the hardware video-recording system DVR made on basis of the computer with dedicated software and simplified user interface. This system is almost completely deprived of hardware control elements, most of operations are executed by means of keyboard display and menu systems.

User of DVR system has no possibility of interference into operating system execution and of changing the software configuration due to what human factor’s impact on stable operation of video recording system is eliminated. Such systems can perform complex operations, being at the same time as protected as hardware video recorders and as well has capacity and flexibility of PC-based systems. DVR video recording system can simultaneously display video in real time, record it on hard drive or flash-drive, analyze variations of monitored zones in abundance, can playback prerecorded video, broadcast video stream on local network and on internet, receive and display video transmitted by other server, communicate video to other security systems and much more.

Summarizing, hardware video recorder is the simplest, cheapest and most reliable equipment. If more functions are required then a PC-based solution can be used, such a system is more expensive than the hardware one, but at the same time is more flexible. And finally when a crucial factor is the reliability of a security system, the DVR system of video recording should be used which are of high stability, reliability, processing power and security. Of course, DVR video recorder’s price is higher than of hardware systems and PC-based systems, as in such video recorders highly effective equipment and purposely designed software is used.