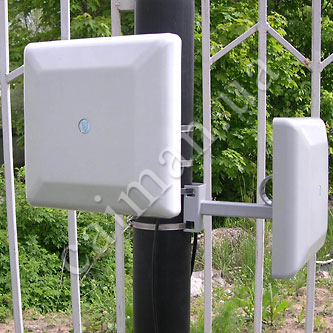 Radio-beam system of perimeter security is based on the principle of beam’s parameters variation when an object crosses it. A typical perimeter security radio-beam system consists of two elements – microwave emission’s transmitter and detector, located at a distance from each other. The transmitter produces a magnet field of elliptic shape and the detector registers parameters’ variation of this field. And in case of sensing a foreign object within the surveillance zone the detector signals an alarm to the alarm panel. Radio-beam safety system can be made on the basis of a couple or several couples of transmitters and detectors depending on type and configuration of the guarded territory on the object.

Radio-beam perimeter protection system is designed for monitoring open perimeter’s areas of a guarded object or territory. Radio-beam safety system is of low-sensitivity to weather change but the essential requirement is a direct visibility between a detector and a transmitter of the microwave field. Synchronization of a transmitter and a detector of the radio-beam system is either accomplished by wire or by radiofrequency channel. Radio-beam system of perimeter security can monitor land parcels reaching several hundred meters; if several couples of detectors and transmitters are used then stretch of radio-beam security system is unbounded.