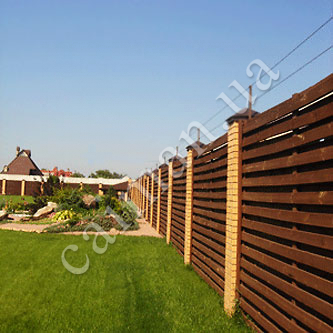 Hard-wired radiofrequency security system’s control zone for sensing foreign objects uses a detector and a transmitter of ultra-short wave band with receiving antenna and transmitting antenna. Two parallel stretched electrical conductors are used as radiofrequency system’s antennas. Pigtail of receiving and transmitting electric conductors can be installed on the surface of buildings, fences and barriers for detecting malefactors attempting to overcome them. When monitoring areas of a guarded object’s perimeter which are for whatever reason open, radiofrequency perimeter security systems with sensors deepened in the ground at little depth may be applied. Similar systems are called ‘leaky wave line’ and a strip 3-4 m in width and up to 1 m in height is usually monitored by them. That is more than sufficient for intruder detection.